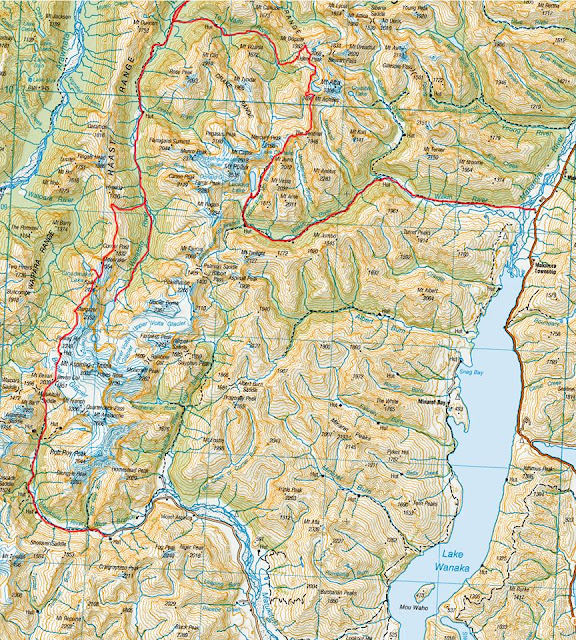 Day 0: Early 1990s car pushed to its limits. Busting with five peoples gear for 18 days and five bodies we drove from Christchurch down to Makarora in serening heat. Last minute treats including fresh apricots and cherries from a lovely central Otago lady. After dropping off food for food drop at the Waiatoto Jet Boats, Hannah’s clearing we start up camp at Makarora for some sleep before our adventure began. 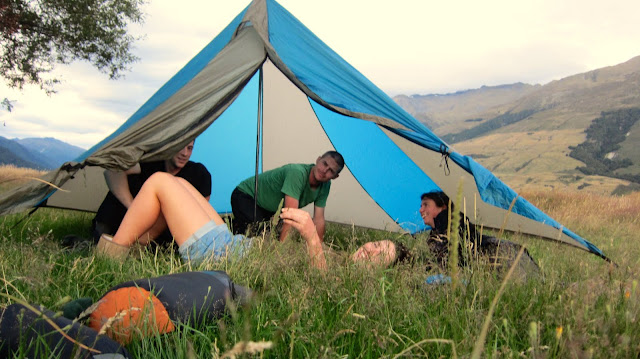 Day 1: A rather relaxing start with a wander up the Wilkin river. Following the river we ran into the Wilkin jet boats cruising people up the beautiful river in the clear weather. A deep river crossing to Kerin forks hut claimed a drink bottle and watch from our team but was nothertheless  very refreshing. We arrived at Top forks hut 11hrs later (25km), quite shagged from the full days walking with our 20kg+ packs. The river travel was straight forward but it took it out of us. A lovely hut with a resident baby hare that we adopted temporary. This was 1 out of 2 of the only huts we would be staying at for the 18 days so we made the most of it. 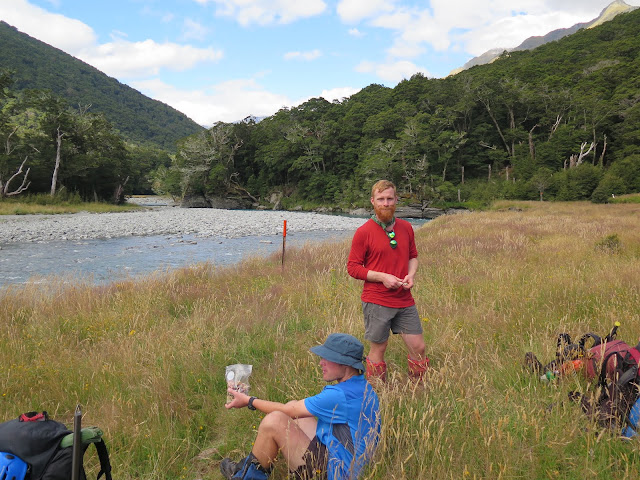 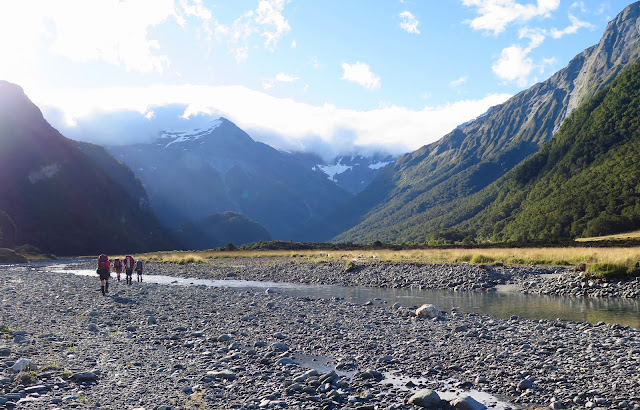 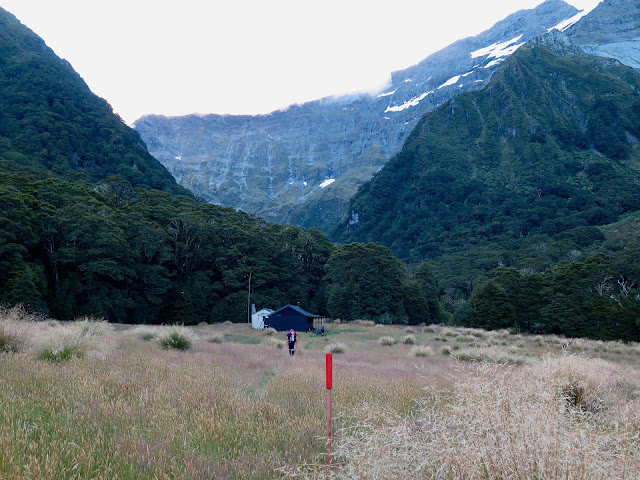 Day 2: An incredible morning view louvered us out of the hut into the huge wild landscape. This was just the beginning… A warm morning swim at lake Diana surround by towering rocky mountains and remains of glaciers above us set the scene. The crashing of breaking ice echoed around us highlighting how unstable the ice and rock was. Side trip to Lake Lucious, a very silty lake surrounded by steep rock faces. Onwards to Lake Castalia we arrived about 12.30pm for lunch after leaving the hut 9.00am. A strong turquoise blue of the lake contrasted with the vertical grey rock cliffs boarding the lake, decorated with multiple cascading waterfalls. 150m waterfalls, one after another, gravity directing them into the lake. So spectacular. Our days work was not complete. An intimidating 600m vert climb up onto the ridge North of Mt Juno on steep loose rock was up next. We all carefully made our way with sections involving full body climbing. We use a fixed rope on a smooth rock no fall zone close to the top of ridge to ensure the safety of our team. We hoped out on the ridge about 5.30pm with stunning views down the Wonderland valley. Pushing on we followed the ridge and did a small abseil at point 1821, down a drop in the ridge which could be avoided by dropping down to ice field and sidling below. After sidling Leda Peak on the snow the light was starting to fade and we took a beauty of a campsite on the shoulder of Leda peak. A flat spot amongst the rocks that was sheltered from the wind (1800m). We weighted down the 2 person tent and 3 man fly with large boulders. A big fed and we were fast asleep. What a day. 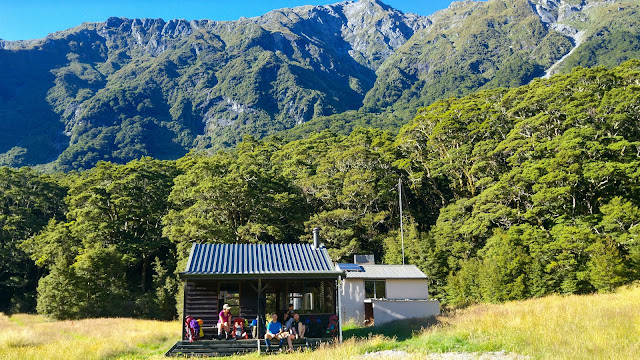 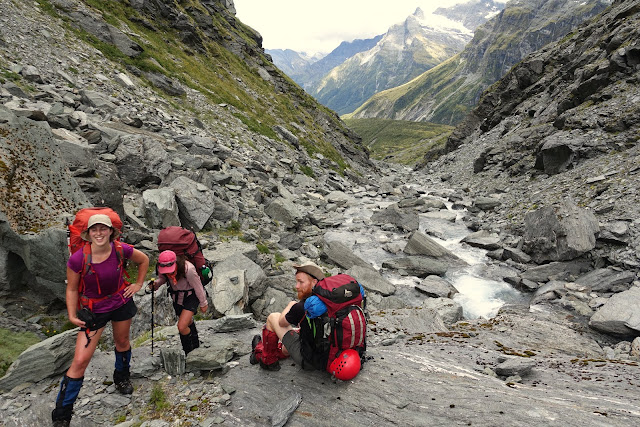 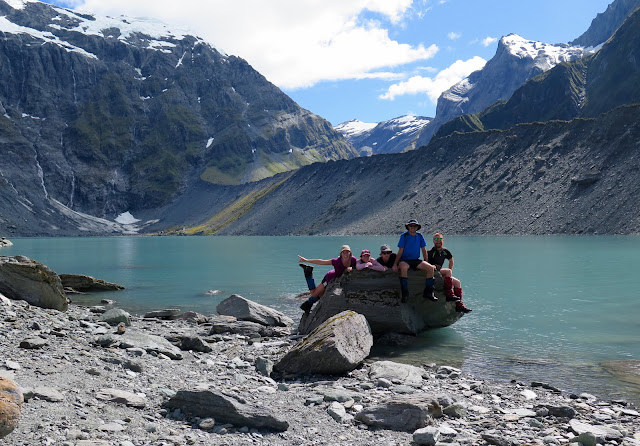 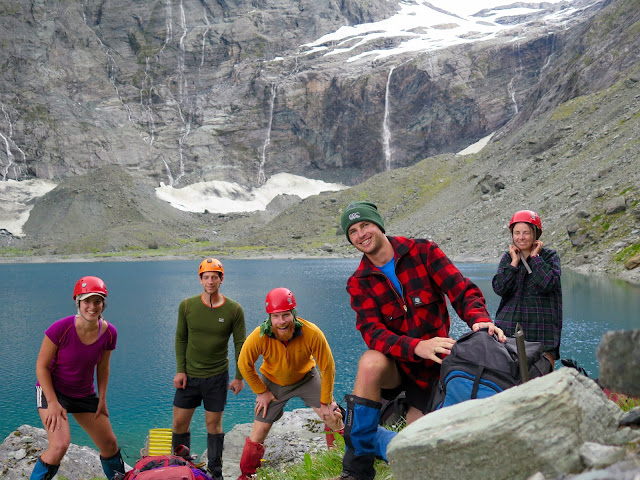 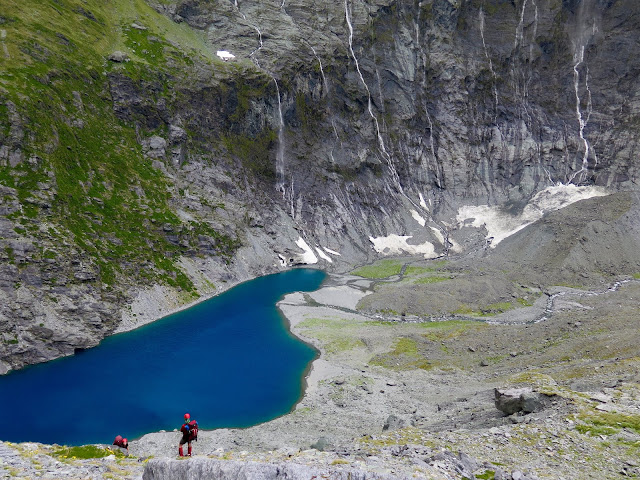 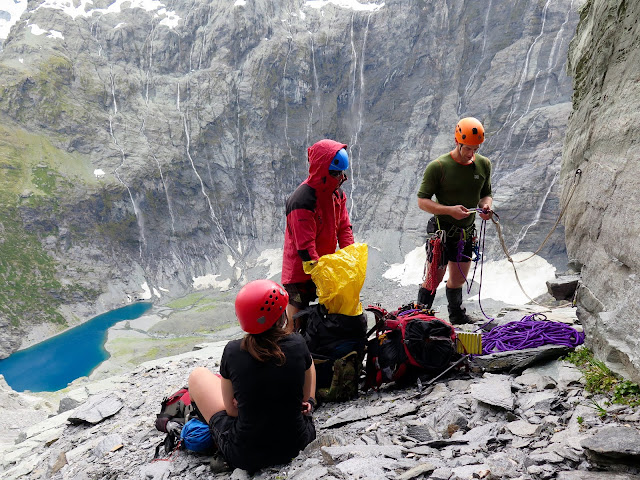 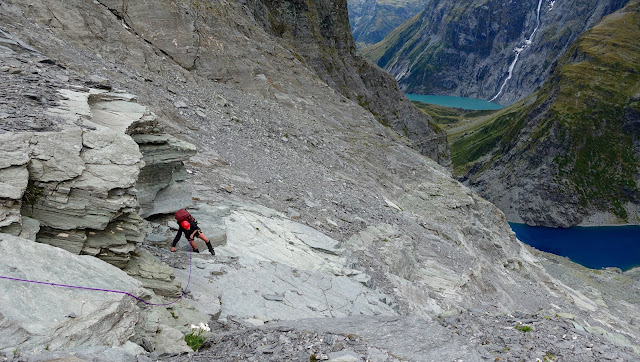 Day 3: Rain gently patted on the fly early in the morning. I was pretty cosy in the fly tucked in the middle with the two guys either side haha. We all decided to wait out the weather and squeezed into the fly for some team bonding during the day. A minor flooding incident occurred about mid afternoon when I removed all the big sharp rocks from my sleeping area causing the water to settle in the fine gravel, creating a moat through the middle of the fly!! Nick swiftly dug out a moat outside around the fly which worked great through the night and heavy rain. A hot chickpea dinner was consumed along with some good banter. 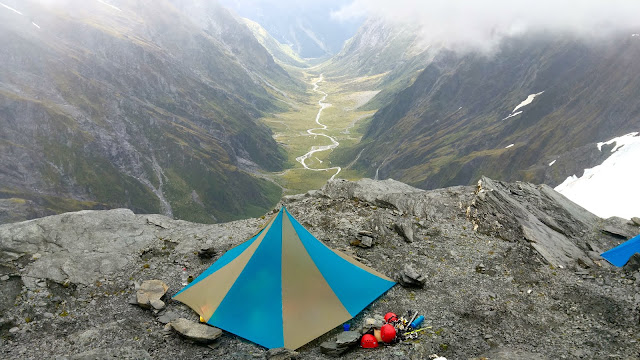 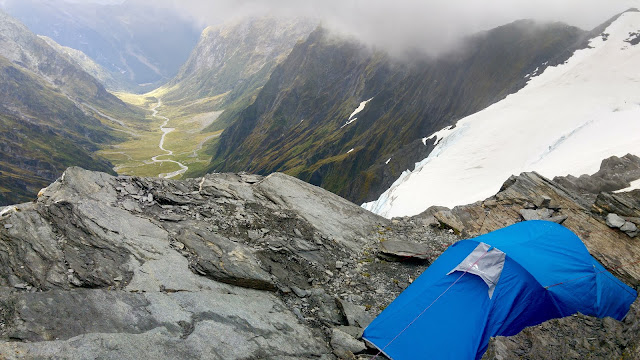 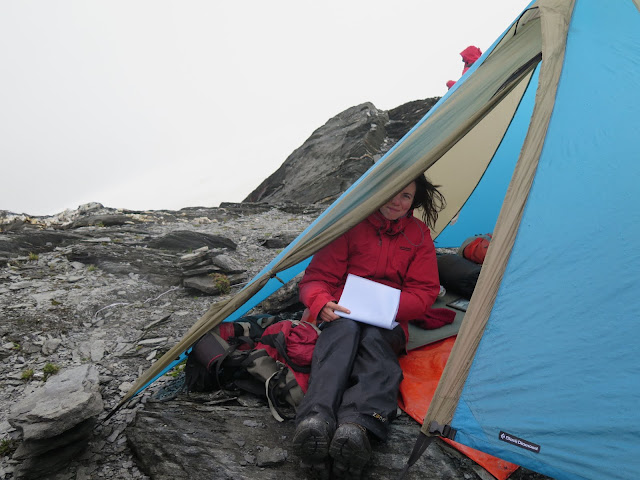 Day 4: Hearing the rain on the fly we all slept in. About midday the cloud started to break. Spectacular views straight off the cliff where we were camp and down the Wonderland valley, up towards Leda peak and along to the Sentinel- the planned route for the day. The sun so warm we packed up and make tracks at 3pm. Easy ridge travel along the main divide with amazing views in all directions. Totally worth waiting out the weather for this section. A steep rock scrambling down point 1841 just after the Sentinel. No ropes needed though. We sided Mt Achilles down the North side of the Te Naihi Saddle and then sidled along to the glacier fed  lake of Mt Achillies. We arrived half an hour before sunset. The alpine lake, one of the most beautiful ever. We jumped in for a swim in the super cold water. Felt so clean afterwards and absorbed the evening sun highlighting the rugged, wild mountains surrounding us. An incredible moment. Set up camp above the lake and Hamish and I slept outside in the amazing clear night. 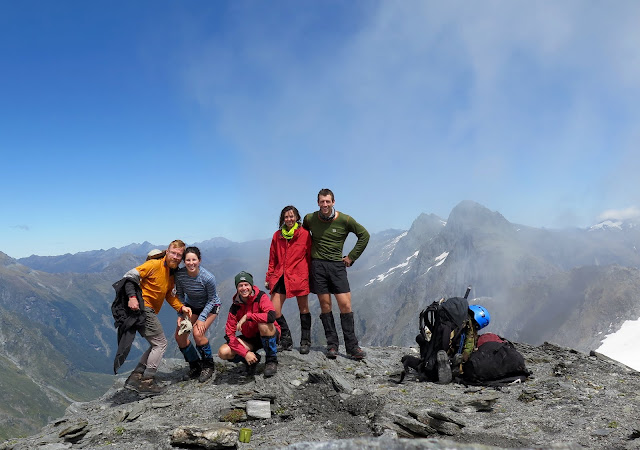 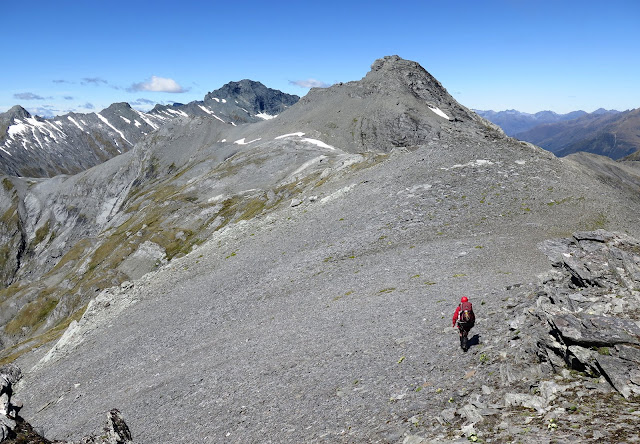 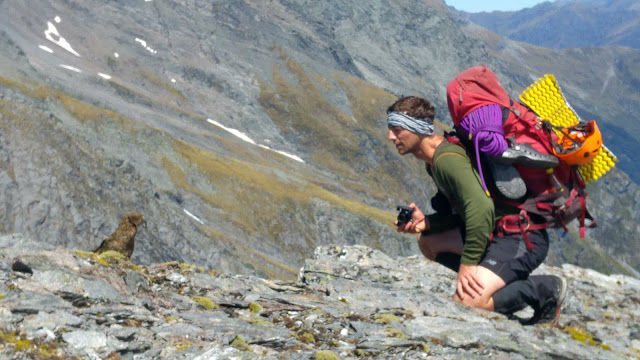 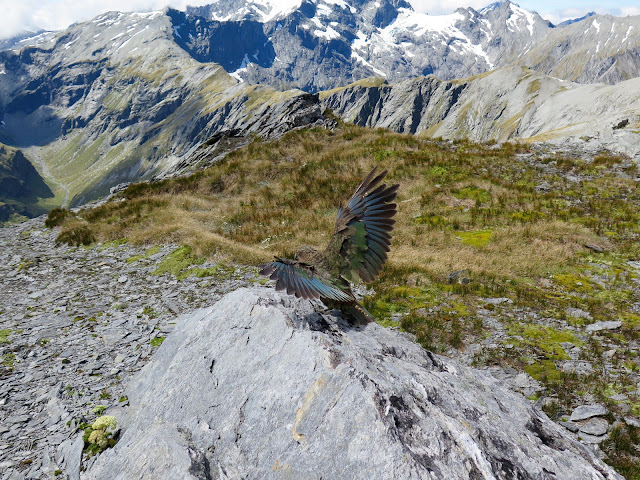 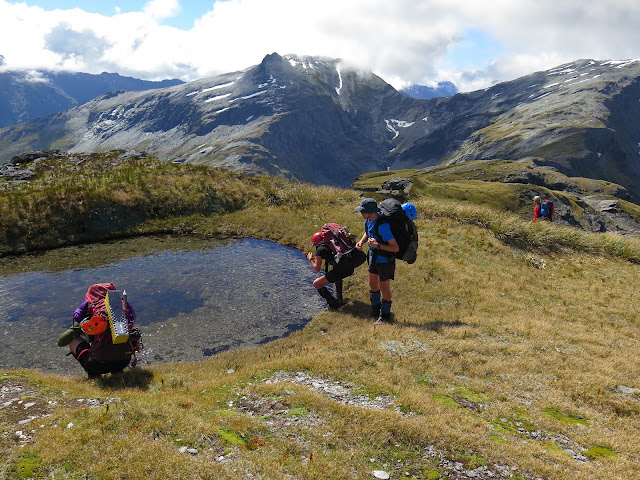 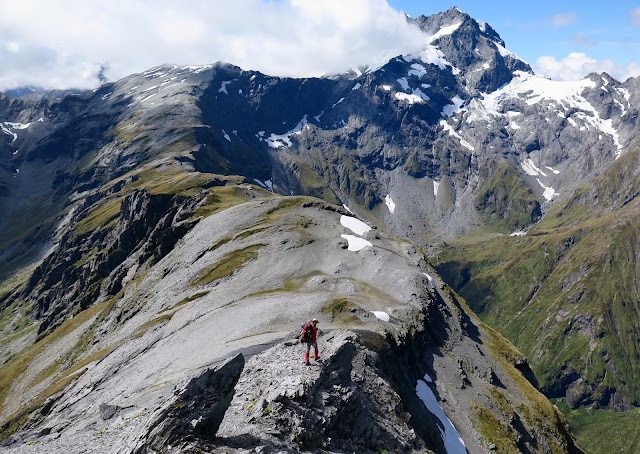 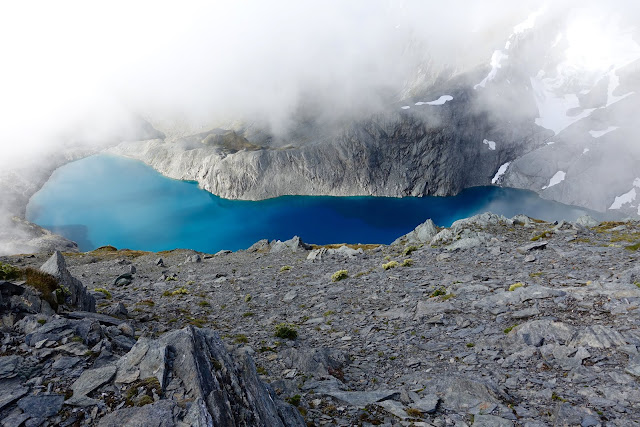 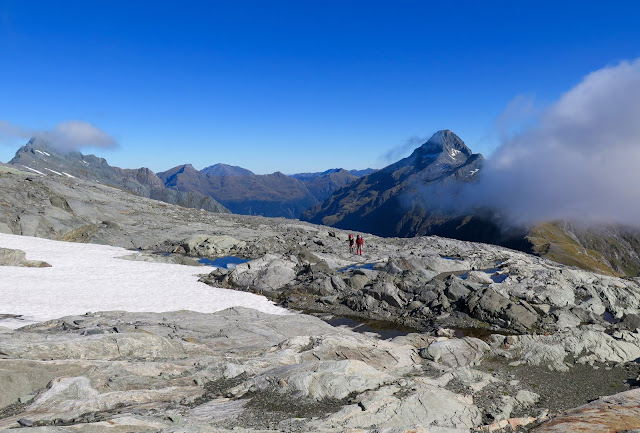 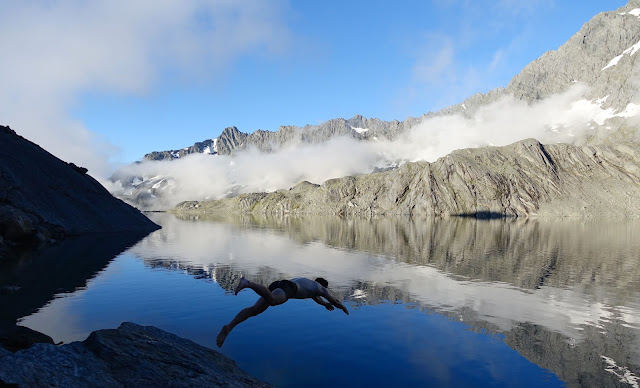 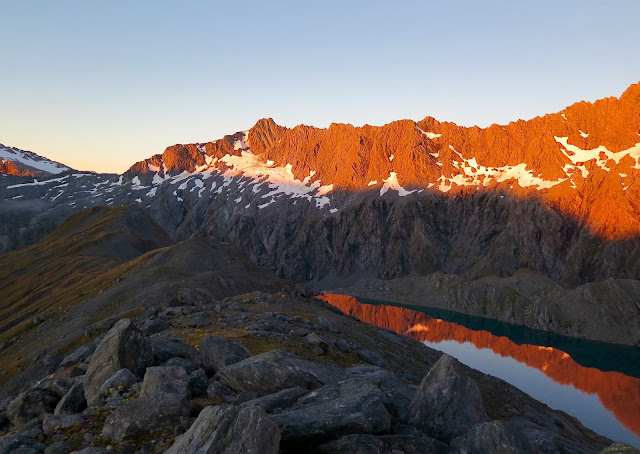 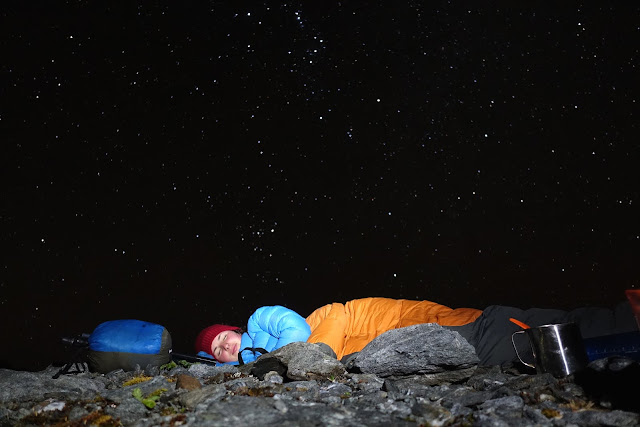 Day 5: No idea what the weather is doing but it fine so we pushed on! Beautiful clear morning set the scene for a morning swim and then off down the upper Te Naihi river where we could see out to the West coast. The valley was filled with mountain flowers and a crystal clear river with imposing steep rocky cliffs up above us. We rested and had lunch under a rock overhang to dry out the feet and escape the heat for a bit. A steep tussock spur lead us right up to the dispute glacier and the scattered tarns below where we set up camp. Hamish and Clare climbed up Mt Dispute, Nick and Josh relaxed under fly and I went to a swim and boulder hopped up to the ridge for the sunset down the valley’s.  Left overs for dinner as we had not planned to be in this section for this long. Nick had some surgery on his infected tooth that had swollen up half of his face. Clear beautiful night, me and Hamish did a P90x session and slept outside. 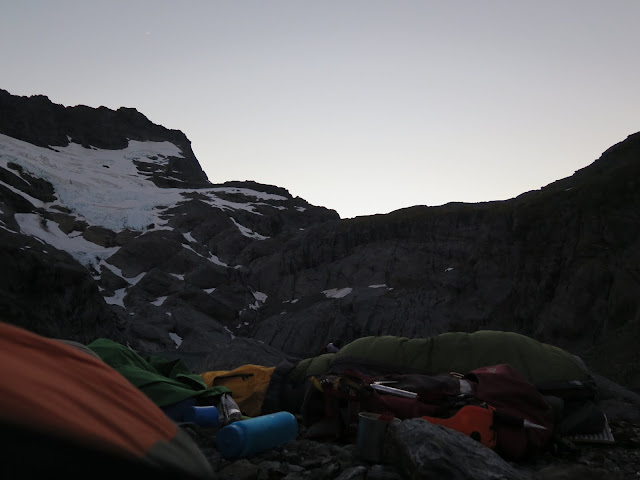 Day 6: Up at first light we packed up, climbed out of the basin and heading down the tussock slopes into the bush to Bosky Gully. Towards the bottom of the gully we navigated steep bluff and huge boulders covered in moss and vegetation. Heaps of spiders! We followed the Te Naihi river down the beautiful valley hopping in the bush in the steep gorge sections. Well formed deer tracks in the bush allowed fast travel. Clare went to a float down the river while crossing the Te Naihi for the last time. We arrived at Axis flats at 9pm, a very full day and we knackered!! Quick dinner followed by a sleepless hot night under the fly with mosquitoes attacking us no stop.

Day 7: Up at 6am, Hamish, Josh, Clare and I traveled down the Waiatoto river to below Casey’s hut where we picked up a food drop from the Waiatoto Jet boats. As we filled up our bellies the jet amazingly came around the corner and we were able to get the weather forecast for the next week. It was looking fine! Arriving back to Axis flats finding Nick in his floral underwear keeping cool we went for swims and hid under the scruby bushes on the flats, eating the excess food we had. Scones for dinner, all homemade by Clare. Yummy. As the light added we saw a helicopter shooting Chamois on the Haast range. Campsite yoga, campsite fire, campsite stories and food. What a night….. the mosquitoes however attached again.

Day 8: Eager to get moving and escape the sandflies we hastily packed and continued up the Waiatoto river. A packs where very very very heavy!!! We jumped into a leaky tin dingy Kim said we could use and floated across the Waiatoto (in low flow). Drys packs were great but Hamish and Nick took the dip in the icy river and swam back across to return the boat. Had a little trouble finding the start of the cattle track and after about 1hr of bush bashing we linked on and the travel was much easier. After lunch at Drake flats we continued up the valley to Boner flats. The heat made us sweat heaps and many rests were taken to give the body some ease from the heavy packs. Arrived at dusk, set up camp and all slept like babies!

Day 9: This was supposed to be our rest day however I had a big desire to get to the head of the Waiatoto river where there is a lake fed by surrounding glaciers, looking up to Mt Aspiring. Bumbags ready to go the travel at first was light and easy, in contrast to the heavy packs the pervious day. We followed a side river through the dense bush to avoid the upper Waiatoto river. I dense bush bash was required to get back to the main valley to where we came out at the lake. A very cool place to be! Waterfalls gushed down from surrounding glaciers and vertical rock faces. Very few people had be up there and it felt very remote, untouched and wild! We boulder hopped all the way back down the Waiatoto (totally doable on low flow), large powerful gushing torrents of water. It was quite exhilarating and I was peaking. A spontaneous swim in a beautiful side pool to freshen up. 12hr day trip…..we were not to well rested. The custard for dessert topped off the day!

Day 10:  Sleep in.. we slowly got up and amped ourselves for the steep 1500m climb up to the Hasst range. Last morning of sandflies whooop! We followed a rocky side stream then turned left into the bush and headed up towards a spur. A small pack haul was required in very steep slippery section. Followed the spur up to where is came out to open tussock were we rehydrated. A near broken bone while getting water after a large rock dislodged and landed on Hamish’s arm and leg. We slugged up the steep terrain to the top of the Haast range where the weather was average. Set up camp in a basin praying it would not rain during the night. As dusk approached the sky cleared, Very beautiful.

Day 11: Casual start appreciating the incredible views above the cloud and out over the Waiatoto valley which was immersed in cloud. The morning sunlight lit up the clouds, surrounding mountains and warmed our bones. The Rock Wren birds were a common sight along the Haast range. We made a way up rock Wren Gully, a steep gut with a lot of loose rock, were however able to get up without a rope. We hit the ridge then sidled around Moon-raker on the permanent snowfields aware of the icy sections. Coming down to Cloud-maker  lake the weather started to clear. The valley was full of white and yellow mountain flowers. An absolutely stunning place to be! No wind a beautiful relaxing evening, topped off with a skinny dip in Cloud-maker. Refreshing after the previous bush bash where your hair and everything gets covered in moss and twigs. Yummy dinner topped off with some chocolate mouse set in the cool of Cloud-maker. Some experimental night photography was great fun.

Day 12: Up early the clear but frigid morning in the basin got us going. A bit of morning dancing to warm us all up. A steep climb up to the ridge we then dropped down to the Western sidle that lead to Colin Todd hut.
Posted by carolinebellamy at 03:32:00