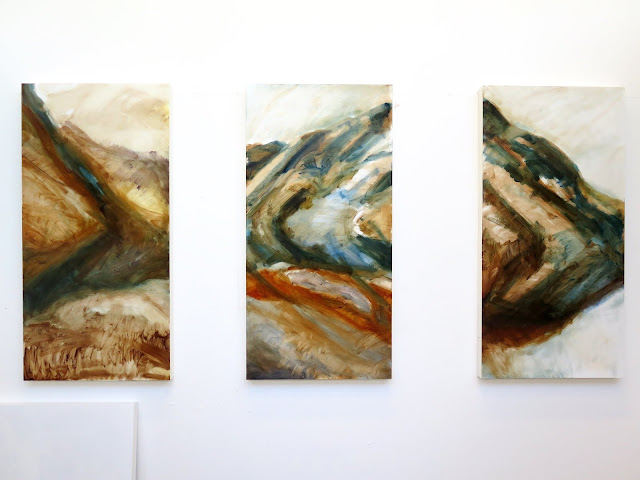 Experimenting with transparent layers in the underpainting. Using the natural sineas and umbers and orches for the warm tones and prussain and ultramarine blue for the cooler tones, with a hint of violet. Keeping the energy and movement of the landscape present- evident in the brushwork and transparent overlaying. Limited palette unites the works. Having a more complex underpainting will give the work more depth and interest- hold the viewer. Gives me time to establish the composition and lights and darks. Repetition of the triangular formation creates some harmony within the works. Some areas of more pure colour help lead the eye. Do the paintings have quite a wet and rainy feel to them atm? Still lose the reflection line so the painting is not divided up- does not dominate. I might place these paintings inbetween the pervious set of three.
Posted by carolinebellamy at 20:05:00 No comments: 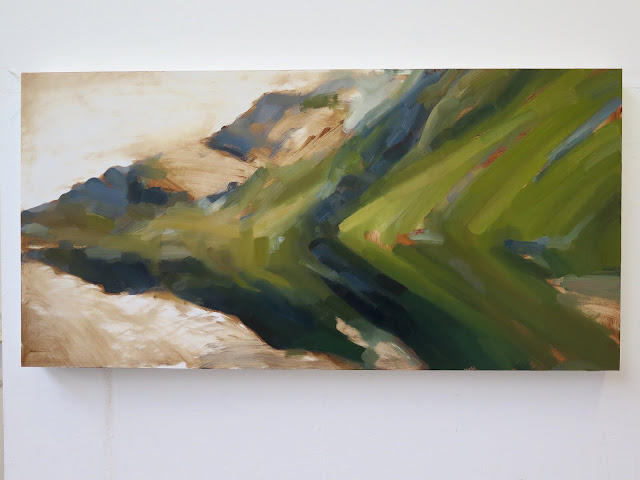 At the point where I just want to leave this painting where it is at. The composition and combination of underpainting and thick paint- well balanced. The gestural marks of the underpainting are not just painting marks, they suggest naturalistic forms- as the top layer is suggesting this- tenses it out of the underpainting. Again losing the reflection line we move away from a figurative representation- something else begins to come out of the painting. Good amount of contrast.
Posted by carolinebellamy at 17:42:00 No comments: 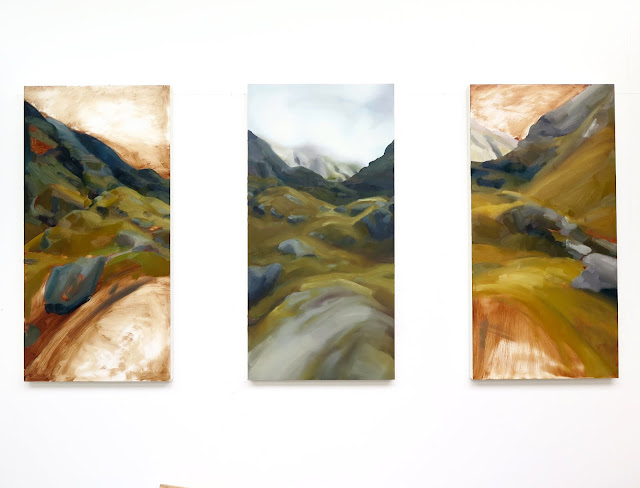 Letting the underpainting and underneath layers and colours come through. It creates a tension and a push and pull. The act of painting becomes more primary than the landscape. Can do transparent washes over the underpainting to create more depth and variation. The relationship between the two different layers is very interesting. It holds the viewer.

Posted by carolinebellamy at 20:13:00 No comments: 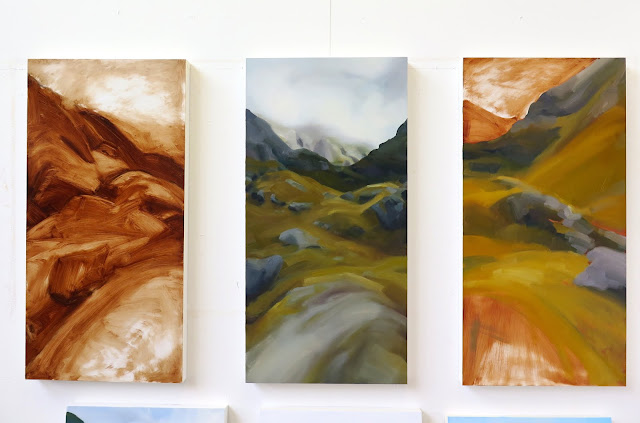 Triptych series primaraly based on the form of the land, not water/reflections. Having the reoccurring declavity in each painting- natural passage way through the landscape both physically and visually. Declavity also formed by the shape of the three paintings- repetition works really well. Create a rhythm and subtle flow and connections between the different paintings. They will feed off each other- complement and contrast. Strong sense of depth within each of the paintings. Strong foreground diagonals lead the viewer in. The free energetic underpainting creates dynamic movement. Keep the contrast levels up but be careful to avoid a romantic reference.
Posted by carolinebellamy at 19:48:00 No comments:

Progress of a more realistic approach painting the landscape. Base coats. Carefully observing the tone and colour in painting. Making sure the brush gestures serve the forms well...not just a painting mark.  Thinking about aerial perspective and creating a sense of depth. Thinking about how the light is hitting the brushstrokes, especially with thick impasto paint.
Consider how I can let underneath layers come through and influence painting and create more depth/interest and different surface and colour relationships.
Layering?? It there a lyrical pattern/ melody of brush strokes unifying the work?

Posted by carolinebellamy at 21:49:00 No comments: 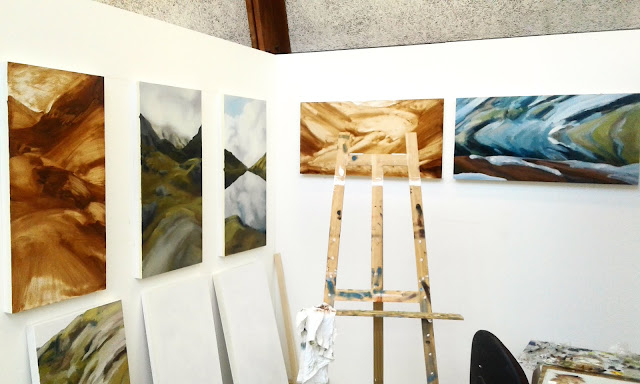 Contrast of a figurative and abstracted landscape. Base coats. Source- Moonraker Lake
Studio space at university. Looking at how the body of work is developing as a whole.
Posted by carolinebellamy at 03:28:00 No comments:

Friday evening Hamish and I made our way to Arthurs Pass, time passing quickly with good chat soon arriving at the cmc lodge. Roasting by the fire in lodge we organised our gear for the early morning start of 3.30am! I was pretty pumped to reach the summit tomorrow.

Before I knew it Hamish was shaking me awake and we had a fed before driving to the Otria carpark. A light mist rain was clearing and the stars were starting to peak through allowing us to hope for firmer snow. After crossing the footbridge we headed up a snowy ridge that lead to a cairned route leading to Warnock bluffs. The snow was soft which made tough work. We travelled quickly up and over the exposed Warnock bluffs that had a good mix of rock and snow making the climbing enjoyable. Reaching the top of the bluffs the sun began to rise over the eastern mountains lighting up Rolleston in the distance, making us realise how far we had to go. 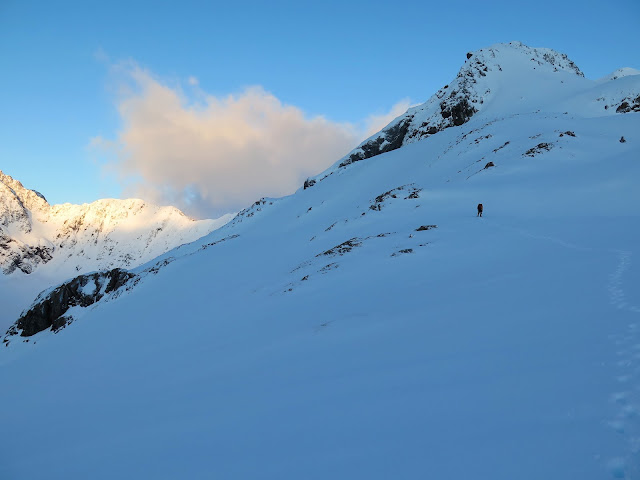 A slow snow plod followed along with strong gusts of wind as we made our way up to Mt Philistine. We made the summit at 9.00am getting a view of the Philistine ridge we were to follow. We were both feeling unfit but both had good endurance so the soft snow did not stop us. After you go pass Mt Philistine there is no bail out options before Mt Rolleston so its a big commitment. 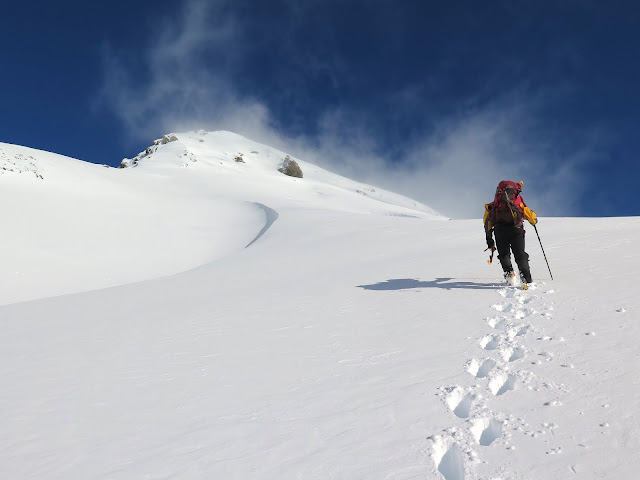 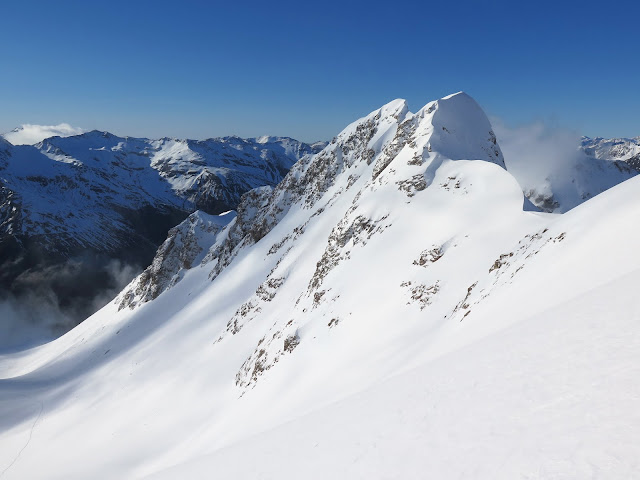 We pushed on along Philistine ridge where there was a mix of reasonably flat travel and tricky rock and snow narrow exposed sections, where careful down climbing was required. The cornices were very overhanging and open as the snow cover was not super deep. At point 2000m we got a direct view of the climb up to the summit of high peak Rolleston. An obvious snow gut lead straight up to the summit. Easy. However before the final climb we had to down climb down a very exposed part of the ridge were the snow was becoming soft due to the heat of the day. A mix of straddling, crawling, and down climbing the ridge was requiring to pass safety haha. Enough stress for me. Hamish did a sweet job of leading and finding a good route through this. 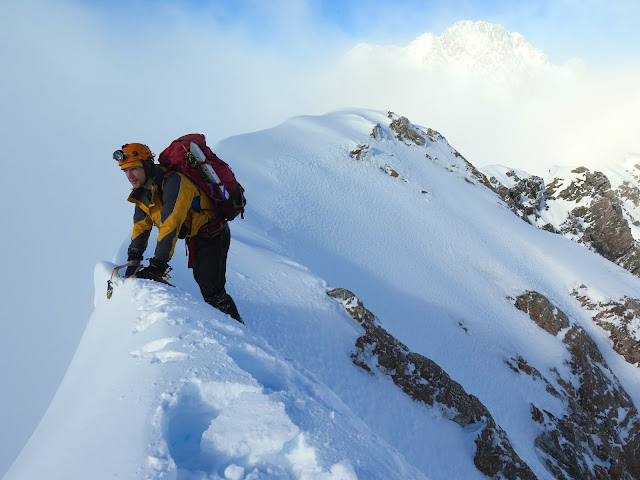 After a quick snack we continued our snow plod up towards to summit. Legs were pretty shattered by this point. As we made our way up the snow gut bits of ice and snow were cracking of the rocks from the heat and flying down at speed towards us. They hurt if they got you! 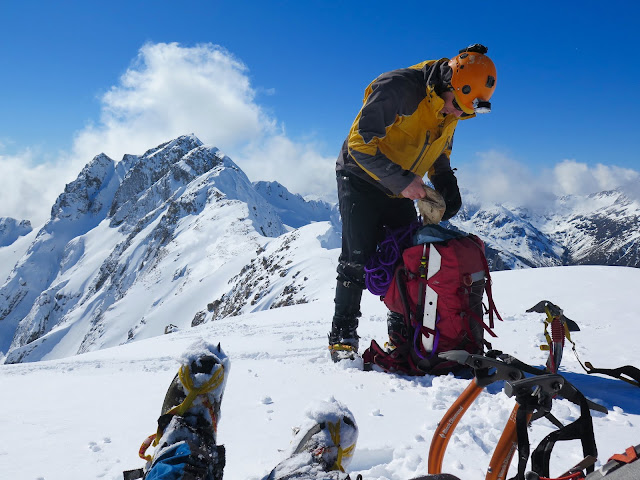 Popping out at the top of Rolleston high peak the views were stunning! Elevated above the cloud we could see over towards Mt Alexandra and down towards the Arrow smith range. Views down the Rolleston river were also pretty awesome! We didn't have to much time to take in the view as it was about 3pm. The snow was very soft and slushy on the top making the traverse very nerve racking. A mix of tiredness, soft snow and exposure made some sections very challenging and scary! It is very easy to psych yourself out so you have to be very focused on what you are doing at that moment. Quite mentally draining. 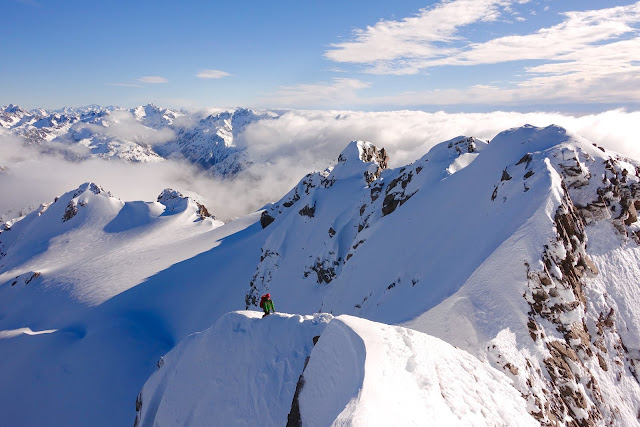 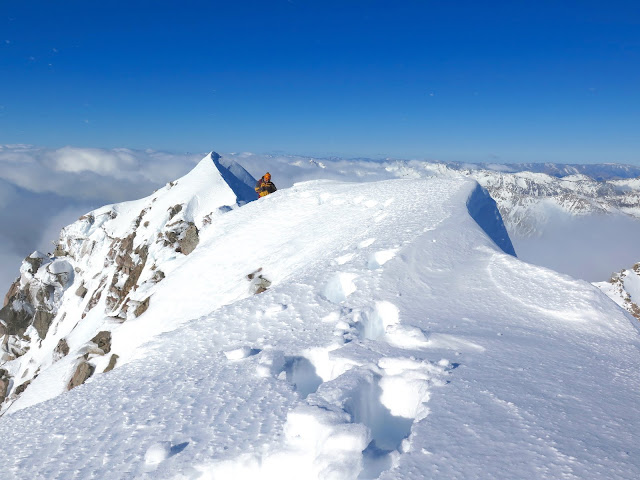 Coming down the last section Hamish set up an abseil on an existing sling off a rock to get pass a icy step and down to the base of middle peak Rolleston. I was very grateful for this. 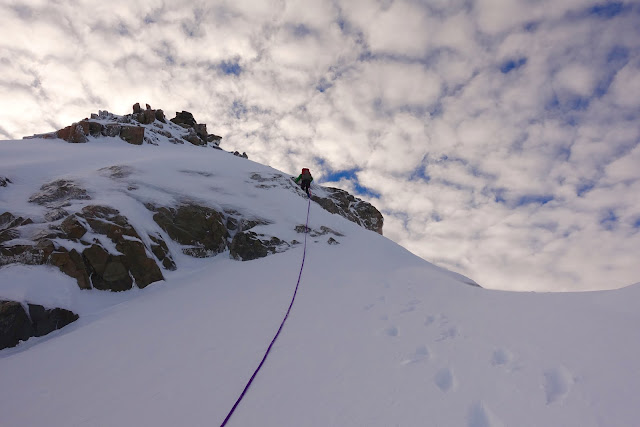 We sidled down and around middle peak then climbed back up into the ridge that lead to low peak. 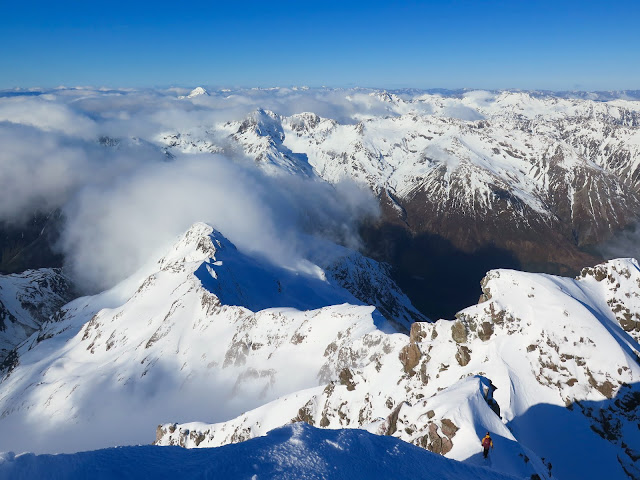 By the time we reached low peak the sun had started to set and there was not a breath of wind. Low cloud had settled in the valleys and atmospheric high cloud spread out across the sky, changing colour as the sun lowered. We each go a photo on the rock that marks where you drop down onto the Otria slide. Being on top of a mountain when the sun is setting is a little concerning. Was an incredible moment though! 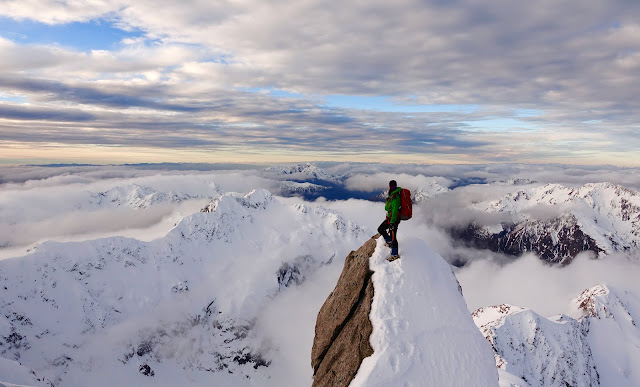 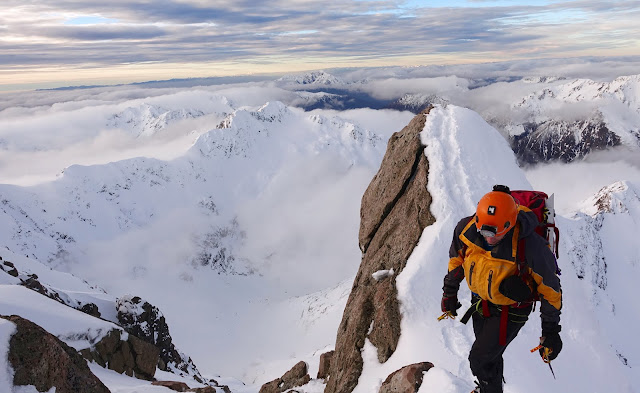 Making a way down the slide was a piece of cake compared to what we had tackled throughout the day. Making sure to go slightly left to avoid the bluffs as the light faded we descended into darkness stopping third of the way down for a snack as we we both about to hit a wall (lacking a bit of concentration). Half way down the snow became very soft and we were sinking in up to our mid thighs! A push and a huff and puff and we emerged out at the footbridge. After decramponing and rehydrating we finished the final walk back to the car. Both extremely shattered. The trip clocked up at 17 hours! The longest day I have done!

Exploring the abstract qualities within the landscape and seeing how I can depict them within painting. Simplify the forms in nature. Exaggerating characteristics that stood out when I was experiencing the landscape. Removing the horizon line pushes the painting away from a figurative depiction.
Naturalistic colours. Continue to develop more complex colour combinations to create atmosphere, aerial perspective and interesting colour relationships.

Posted by carolinebellamy at 03:17:00 No comments: