6.00 pm on a bone chilling Friday night in mid July we all slipped and stumbled our way up to Carrington Hut. Keen we were...braving this cold. The Waimakariri river was filled with rocks blanketed with snow illuminating the path for the five of us as chat broke up the long 4hr valley walk. Guided by Venus and a little sneaky GPS we made it to Carrington Hut on a pretty direct route sticking to the river the whole way.

Carrington hut was very big and very cold and very empty. With a hot drink and sleeping bags lofting we gradually warmed amongst the -10°C air temperature surroundings. Up nice an early, Barkers Hut up the White River was the destination. As the horizon lightened, the clear sky came alive and we got the first view of how low the snow was. It had filled the Waimak valley as far as we could see. Absolutely beautiful and a unique view of Mt Rolleston was visible from the hut.


We were not to leave right away though… my boots had completely frozen solid overnight inside the hut, as well as Kate’s and Sam’s shoes and gaiters! The shoes eased after some manipulation however the boots were very stubborn and after 30 min of pain to the feet from forcing them in water had to be boiled to defrost the boots. Much better! Incredible how cold it can get! Even the mice weren’t out that night.
Four of us set off to Barkers hut and Brandon decided to stay at Carrington another night with his 308. to see out his chances with getting a deer or chamois. A fire for that night was defiantly on the list.
We all hit rather deep snow just after leaving before heading out to the river bed again where the crisp morning air would refreeze our gaiters straight after crossing the river. I had been part way up the White River before in Autumn however with all the snow it was a completely different place, a winter wonderland that sparkled in the warm morning sun. There were huge snow flakes/ frost crystals in the valley which were quite usual and parts of the river had frozen alongside the banks.
We knew at this stage the trek up to Barkers was going to take over the recommended 4 hours because of conditions so we decided to leave Mt Murchison for tomorrow to give us of Saturday to get up to Barkers Hut. Crossing impressive avalanche debris and viewing the many frozen waterfalls up the white river the snow started to get deeper and deeper.
A very comical bunny rabbit tiring to scramble up a snowy bank only succeeding after about 6 attempts made us laugh. Felt sorry for the little guy. Approaching the head of the valley we encountered a nice steep climb up to the hut. The first ridge required a bit of mixed climbing before we reached some steep soft powder snow. When it was your time to lead you were guaranteed to build up a very large sweat. It was tough work.
The last ridge was very icy so we put on our crampons just as we reached the hut. After a good effort of getting the hut door open and about 15mins of breaking through ice with an ice axe to get water, we all took in the awesome views from the hut with not a breath of wind to disturb them. You were able to see right down the White Valley and apparently could see the Waimakariri Falls Hut as well. Such a cool spot for a hut although apparently in high winds.It can be pretty scary (feels like a magnitude 7 earthquake) as it is pretty exposed. They have lost the toilet a few times! Defiantly well secured down now haha.
Three of us hopped into our sleeping bags at the early hour of 4pm- at least they will be warm by the time we go to sleep! The brave Hamish with his non suffering dry warm snow boots decided to check out the route up to Mt Murchison while it was still light and pug in some tracks. While Hamish was hard at work the rest of us played find the avalanche transceiver in the hut which didn’t quite work… too many metal things around... Quick peaks of the incredible winter sunset were made by those brave enough venture out into the very cold and clear alpine night. Kate even had to put crampons on to get to the toilet. Not many places you stay you have to do that haha. 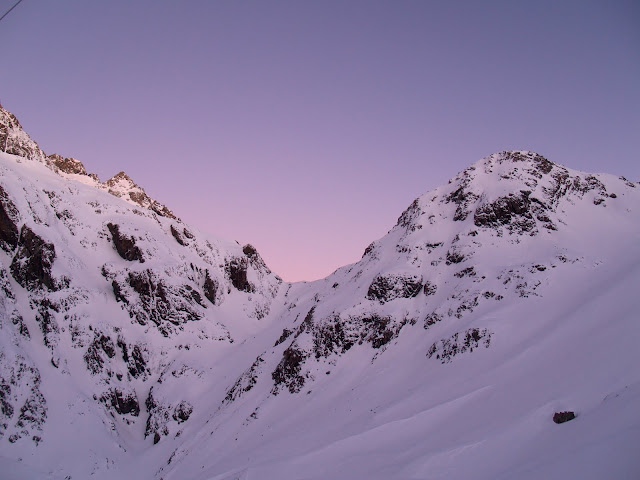 All being a little concerned for Hamish he finally came back well and safe and a hot dinner was consumed before the 7.30 pm weather report (reporter quite humorous), which was looking pretty damn fine! Barker Hut was ten thousand times warmer than Carrington! I guess being smaller alpine hut and out of the valley it held much more heat. Actually got too hot during the night... in mid winter!
After a great sleep Hamish and Sam and I were up at 5am ready for Mt Murchison with Kate staying at Barkers as she was feeling a little under the weather. It was truly cold outside with the sharp chill of frozen snow piercing through our layers. With snow shovels, probes, avalanches transceivers in place and harnesses, crampons and helmets on we were ready to go. Not really knowing what snow conditions to expect I was nervous but ready, feeling good and motivated to do anything that came our way. Hamish plugging the previous night made the first part much much quicker- a nice way to ease into the day… You could not see the big drops hidden beneath the morning darkness, almost keeping you most focused. Before we knew it we were plugging/ slipping/ on all fours going up very soft snow. Slowly but steady we climbed up to White Glacier. The sun had started to rise so we stopped for a bit to take it in, trying to ignore the painful cold feet. The sun was so warm in contrast to the harsh cold surroundings.
We roped together for the next section of the glacier in case of any hidden crevasses, With Sam leading quite a fast fit pace it was quite an effort to keep in time. We soon reached the base of Mt Murchison and decided on going up a side gut leading to the summit. It was hard to tell what the snow conditions were like so a bit of risk was involved whether there may be avalanche risk or be very hard dangerous ice. With Hamish already been to the summit in summer he warned us the top was also very exposed and would take time. Time we did not have unfortunately. The plan was to pitch the route up the ice however we just did not have enough time. The short days of winter catch up on you before you know it. Instead a quick trip to the Kahutea col to see the views down the Wilberforce river and onwards to Mt Cook made the snow plug totally worth it. The still clear day made it prefect conditions.
It took us about 4 hours to get up to Mt Murchison and only 1.5 hours back down to Barkers. Greeted by Kate who had done some awesome sunrise photography, we all enjoyed lunch in the sun taking in the views before packing up for the long walk out.
Leaving a cutc printed trog in the hut we were ready to go…. yea... took us about 20mins of hammering and heaving the door before it finally managed to shut. Hopefully the next people can actually open it! Again following our tracks from the previous day we made good time, also seeing many fresh animal tracks made us realise how much life is here despite the cold. About 2 hours out from Barkers my feet began to thaw out and were incredibly painful to walk on. It was so intense I could barely swallow. Panodol was taken and with 7hrs walking to go I just had to push through it.
Everyone was feeling good though and we approached Carrington Hut before dark. Brandon had a great few days out seeing a few hind, getting fairly close but not quite able to get a shot. But even just seeing the animals in their natural environment was pretty awesome.
Nina Dickerholf and her team just left the hut before us also going back to the car park. We weren’t the only crazy winter adventurers. With a few a snacks consumed and layers applied we were off. Again the intense evening hues reflected in the Waimakariri river and lit up the surrounding snowy peaks before gradually retreating into darkness. After crossing the river numerous times, at 8.30 pm the car park was in sight and we had caught up with Nina. Lucky that, as being so cold our vehicle would not start. Might have had to spend another night in this coldness haha. We jump started it and were off!!
15hr day done and dusted. Great trip guys! Highly recommend this trip, Barkers hut is awesome and in winter for those who are brave enough!
Unfortunately, I did end up getting frostbite and have been to the hospital twice so far. Its not too pleasant and I won’t get feeling back in my toes for at least another 2 months. Take care of yourselves out there.
Date: Jul 10-12, 2015
Tramps: Caroline Bellamy, Hamish Cumming, Sam Stephenson, Kate Wootton
Location: Barker Hut, Arthur's Pass