Tara Tama Traverse West Coast
Participants: Caroline Bellamy, Hamish Cumming, Alastair McDowell, Philip Sültrop and Phil Wallace
After dinner at Darfield we arrived 9.00pm Friday in Arthurs Pass, where all the fun began. With our five packs loaded and ice gear secured we began our way towards Rocky creek hut on the pleasant warm night it was, pumped and excited for what was to come. We estimated a 2-3 hour walk in…. well…..
We gradually climbed through lush greenery up onto the ridge and followed the track down to Rocky Creek where torrents of water gushed furiously past. Apparently it had rained the previous week on the West Coast and the rivers were very high, not to mention the snow melt. It was going to be a long night! Time to get saturated. We navigated following the river and used the track where we could find it which was quite challenging in the dark. With a mix of slippery rocks, torrents of deep water, difficult terrain, at 1am we were starting to tire and needed to get to the hut to be sure we knew where we were.
However with some great nav skills of Alastair and Hamish we knew the hut was not to far away…. hopefully.
Best sight of the night… the hut!! At 3am we all piled into the hut, boots and clothes dipping, relieved to have finally made it. With a big couple of days ahead of us we had a quick snack (can’t go to sleep hungry!) and doubled up the bunks with one on floor and one outside.
Sleeping in to 8.00am we quickly set off into the clear sunny day continuing up rocky creek. Looking up at the dense green bush and rocky guts we knew we were in some rough, wild and exciting country. As we reached a left fork in the creek we followed it up into a steep rocky gut where we heaved each other up careful not to drop rocks. ‘Phew, that was hard’! We ventured into the dense bush leading up to a side ridge. A huge amount of arm strength and good foot holes was needed as we scrambled up, grabbing and dislodging plants while slipping on muddy steep ground. At the top of the ridge we were pretty much tree climbing!
Note to all adventures: Always wear long pants when bush bashing in West Coast otherwise legs will get very scratched. It was rough stuff.
With a view from the ridge we could see the creekbelow us was clearer than the bush and lead up towards
Scotty’s Saddle. Woo thats where we want to go! We all followed the steep rocky creek until the very end,
gaining some good vertical. One last push up the steepest most challenging part to the saddle rewarded us
with amazing 360 views across the ranges, especially the nasty looking narrow Razorback ridge. The rolling
tussock saddle decorated with tarns glowed in the sun, with hardly a breath of wind to disturb it. It felt really
good to work so hard for something and then be rewarded with something so beautiful.
The West Coast sea and lake Brunner reflected in the warm evening sun as we trekked along the saddle, scouting out our campsite for the night. We choose a tarn below Tara Tama so we were able to get up onto the mountain nice an early on Sunday. A well deserved hot dinner was consumed warming us from the inside. As the sun disappeared we knew it was going to be a cold night. One biv bag, one 1 person tent, a fly with walking poles and 5 people. Probably should have brought a tent. Lucky the weather was flawless with clear skies (incredible view of the stars), no wind …..and no warmth. It was very cold!!
Early at 5.00am the West Coast birds chirped us awake. Everything was frozen… and sparkly! The fly and everything under it was frozen. Bivvy bag froze to sleeping bag and there was so much condensation in tent a lake had pretty much formed. A very memorable experience. As our bodies defrosted with a warm breaky we turned out frozen socks and laced up frozen boots. We set off in the dark with much anticipation for the sunrise and summit! The crunchy hard icy snow held our
weight with ease as we approached our assent of Tara Tama with the faint lightening of sunrise.
Crampons strapped on and ice axes ready we steady followed the snowy ridge avoiding the large rocks that we would detour or climb over. It took quite a lot of concentration in the more technical areas where with each step you had to be very sure. Learned some great snow craft tips on the way up and was able to practice then as we progressed. Perfecto!
Gradually the sun rose above the low cloud and lit up our mountainous surroundings. A breathtaking moment. Absolutely out of this world. The warm morning sun filtered through the clouds and there was not a breath of wind. It felt so remote and wild….
Onward to the summit we progressed up, down and around the not too technical ridge. Great for beginners. Reaching the summit at 10.00am the terrain flattened off and again 360 views of mountainous ranges were visible on the clear day that it was. We had all reached the summit safely! Woo it felt great! It had taking a lot of hard work but it was totally worth it. The reward cannot be put into words. The weather was perfect for a summit, we were very lucky. 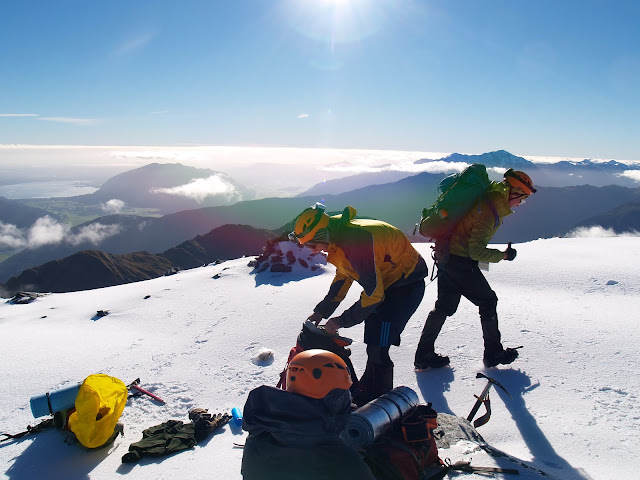 However a successful ascent comes with a safe decent so after refuelling we traversed Tara Tama and went down the other side, practicing our down climbing and ice work. The snow had started to soften so we had to be careful with the more experienced in our team testing out some different routes before we proceeded, finding the safest way. We choose a grassy/ snow gut to decent down to the river below which was very direct and steep. Steep enough to do a complete summersault lol. Before we knew it we were back down at Dunn's Creek with the unrelenting force of gushing water.
Rehydrating, and saying goodbye to the Tara Tama range we approached Dunn’s Hut around 2.00pm. Looking at the maps we realised we had a good 17km to go. With some of Phills ginger nut cookies we were off. We quickly made tracks following the Dunn Creek out to the Taipo river reducing our time. The high river levels sent Hamish swimming and Philipp taking a slip in the freezing white water brrrrrr!! A lack of sleep was defiantly taking its toll with vision becoming blurry and food supplies running low.
We kept moving at a good pace crossing the Taipo river on an awesome cableway before bypassing Dillion's hut. At one point the track became very difficult to find once it had gotten dark however with some help from local West Coast hunters we made it back to the car at 9pm. We had managed a 14 hour day and were still standing, oh yea!! Great fitness endurance training. Thanks Hamish for driving almost 3 hours and staying awake! The rest of us didn’t.
The trip was an amazing chance to explore remote Rough West Coast terrain. We were faced with many challenges which make it that much more exciting and rewarding. One for the coolest things about tramping I love is how primitive life becomes. Everything is simple, eat, sleep, move and take in everything around us.
Living in the moment! Big thanks to Alastair for organising the awesome trip. Bring on more Wild West Coast
Adventures…….
Here is a link to a mean video Alastair has created of our trip,
https://vimeo.com/128302683
Got some great inspiration for my paintings.... 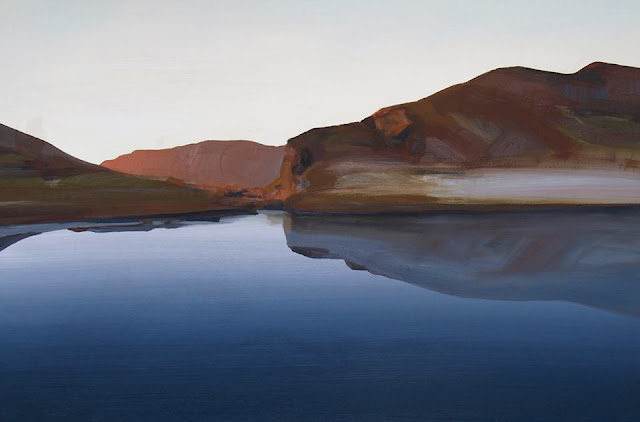 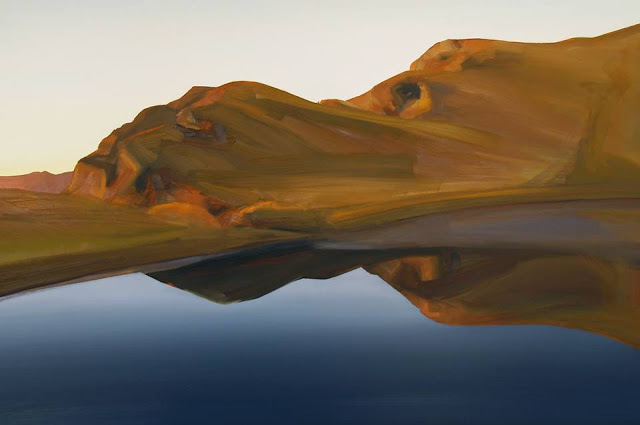